In 1995 Williamsport Hospital, Divine Providence and Muncy Valley Hospital combine to form Susquehanna Health.  Services across the three campuses are combined to reduce duplication of services and Prehospital is one of the first departments to combine.

In 2002, the WAASC board of directors sees the future of EMS changing and initiates a strategic planning process.

Also in 2002 the Williamsport Hospital Paramedic Training Institute is transitioned to Pennsylvania College of Technology and now offers paramedic training as an associate’s degree program.

Our current system consists of the following:

Statewide awards won by our staff: 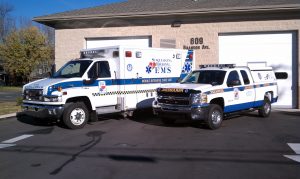 We are licensed in the state of Pennsylvania to provide emergency medical services, with the Public Utilities Commission, and are listed as an American Heart Association Training Center…Read More

The regional delivery of ALS, BLS, and routine and specialty transportation services, and the related education in support of all services provided by Susquehanna Health.

To be the leading regional EMS and medical transportation provider.

We will continue to be leaders in the prehospital and educational environments at the local and State level, with continued attention to quality and value.